This is the second record of intervention for “muscular dystrophy (muscular tonic dystrophy)" who came the other day.

This time it was provided on the 7th day since the last intervention.

See below for the first time.

As I wrote in the first time, what to do and what to aim for in this intervention can be summarized in the following three.

In addition, we will continue to do the following three things to achieve the above objectives.

From the previous measurement, improvement was seen in the part measured last time, and problems were confirmed in some nervous systems that could not be seen last time.

Quantum wave motion device obtains information to grasp the current state concretely and to refer to whether it is improving or not by “wave measurement". (Fixed point observation)

State of chromosome (this time) 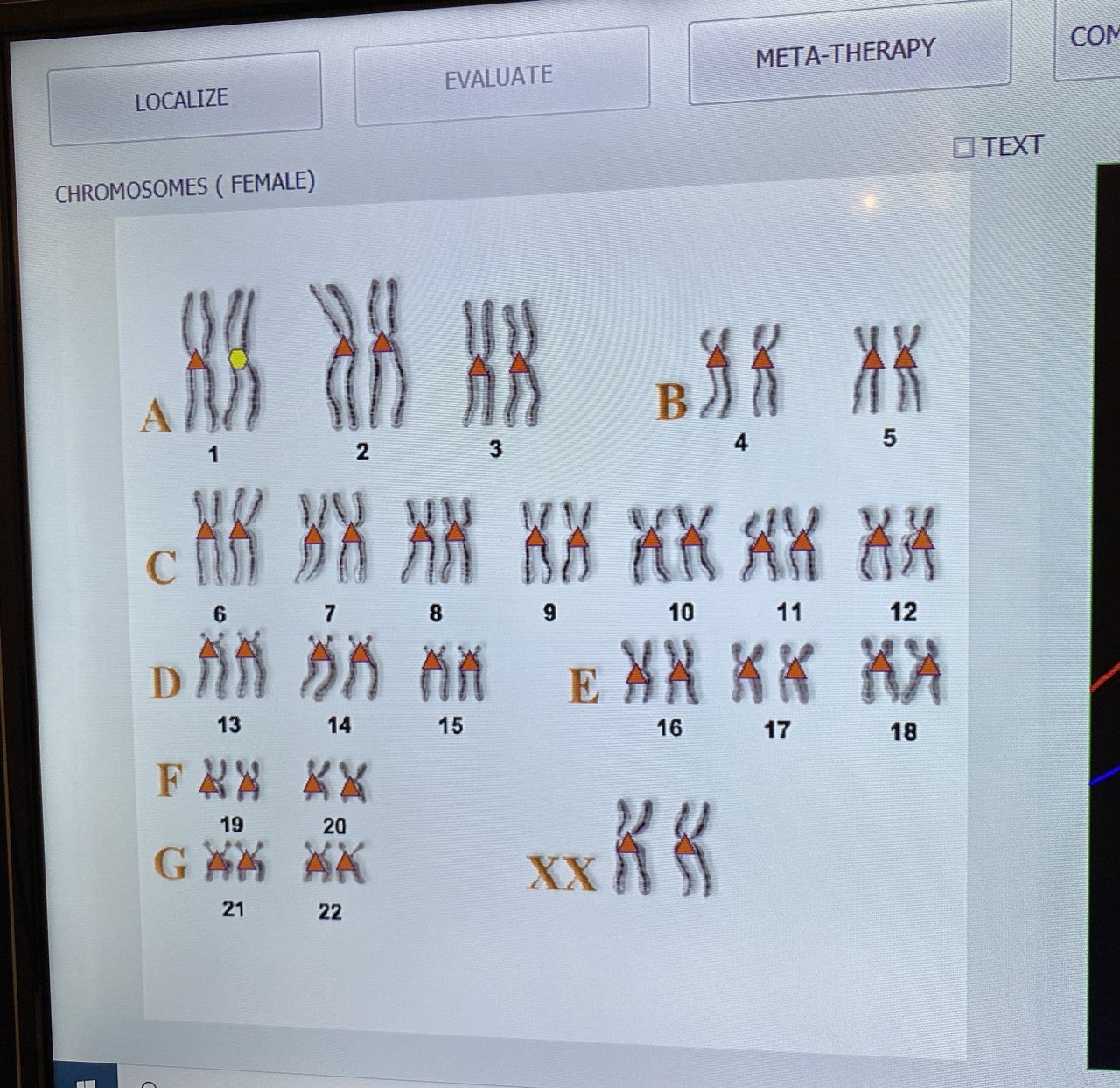 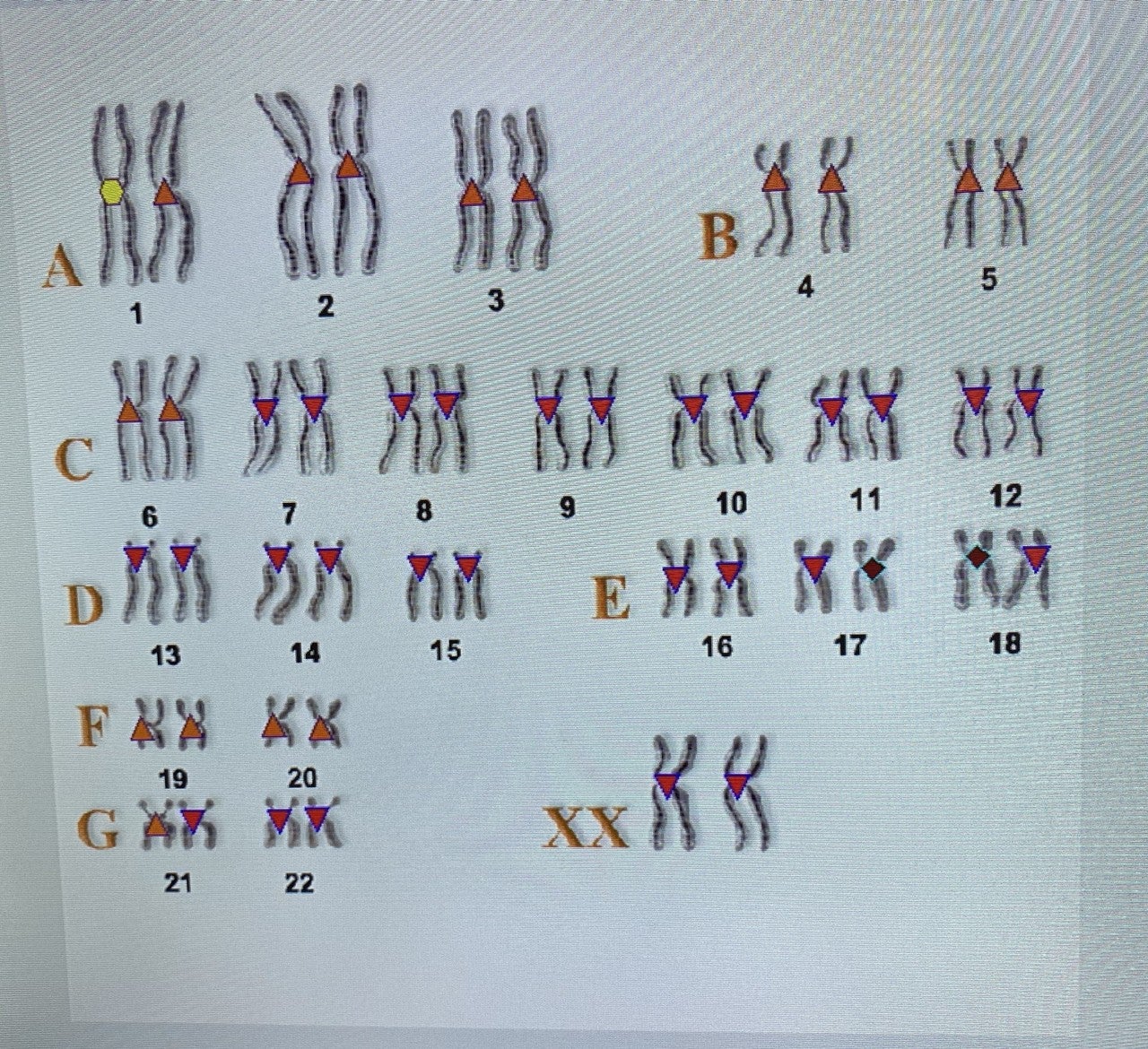 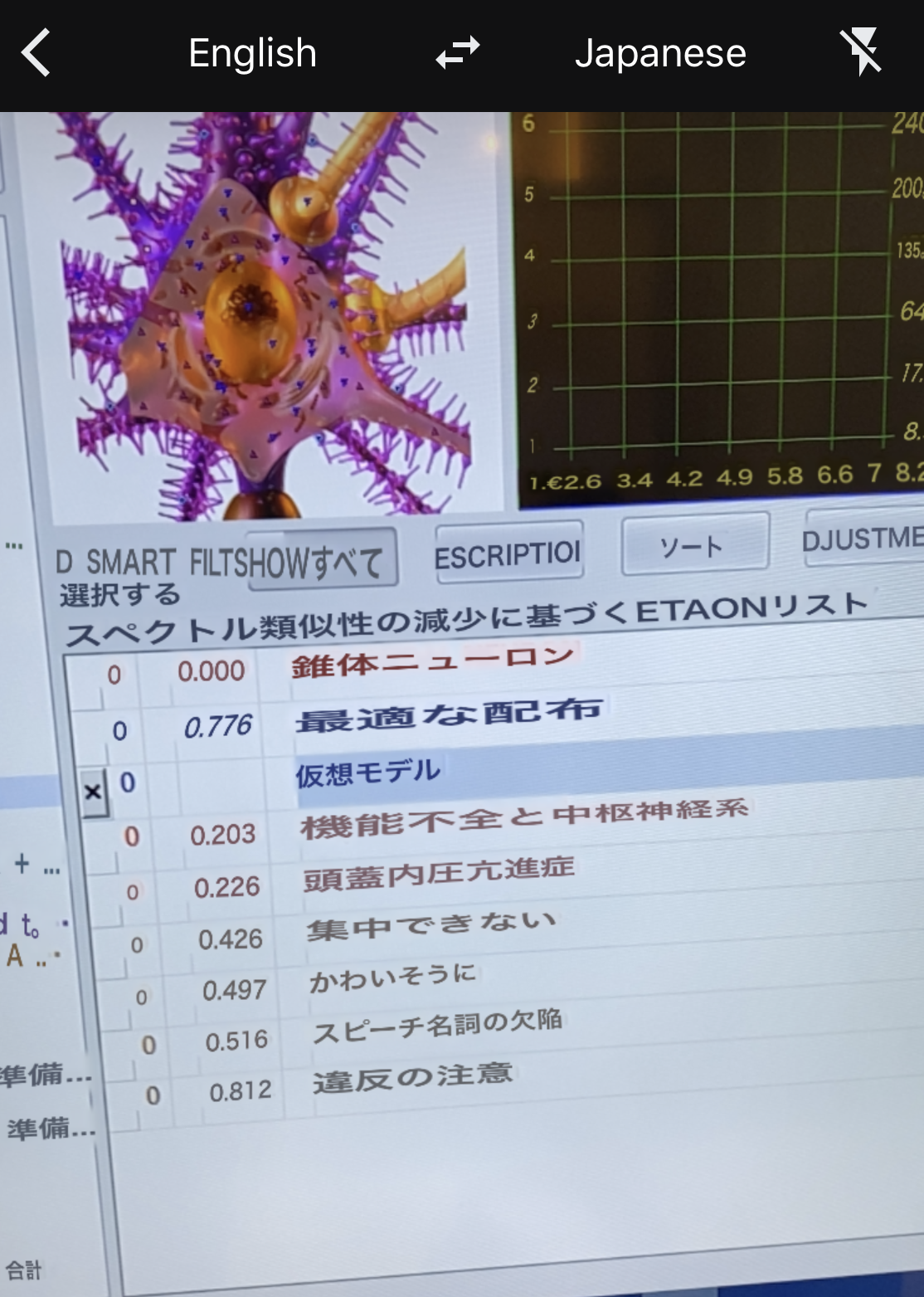 Both suggest problems with neurotransmission in the central nervous system. 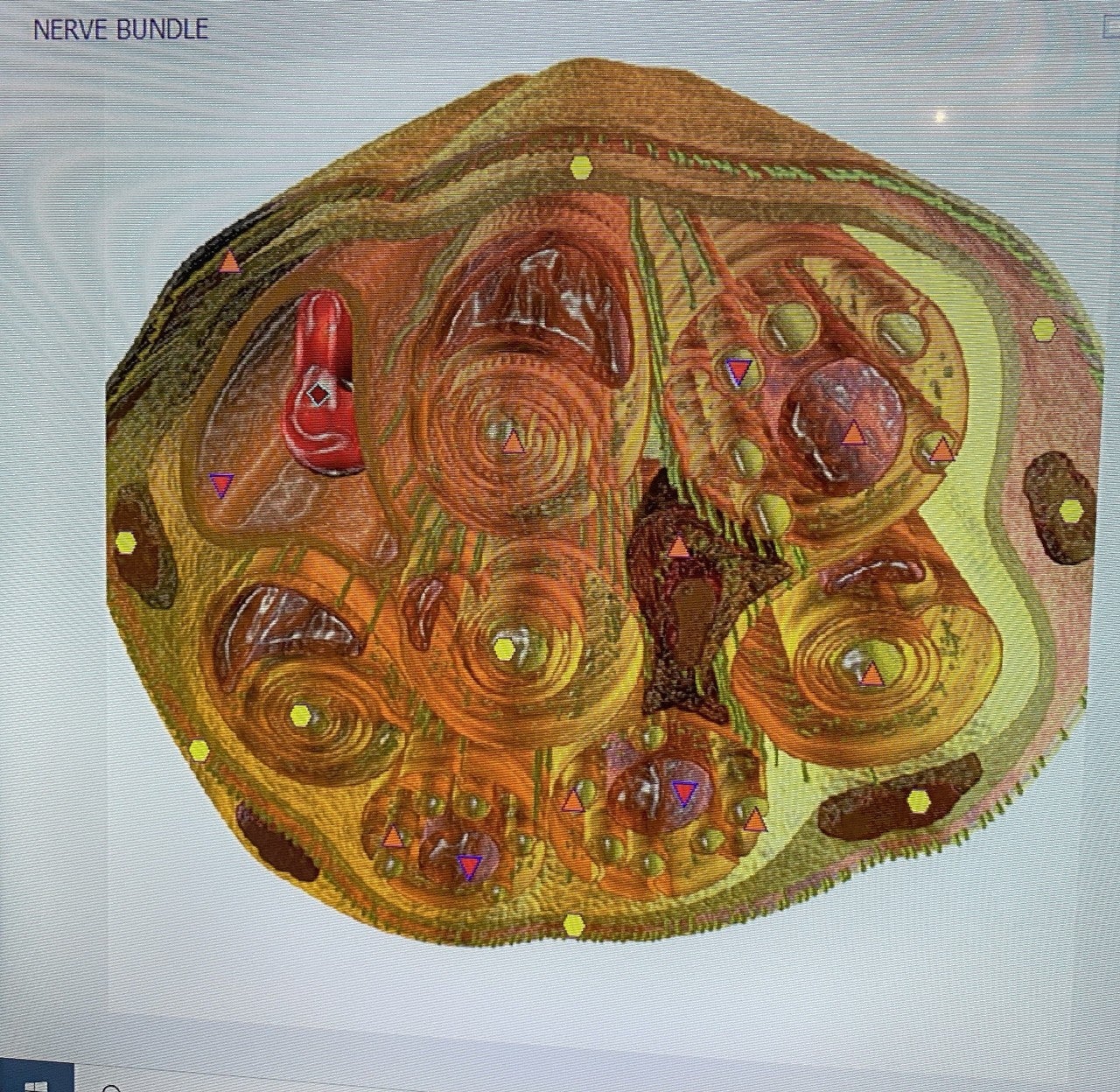 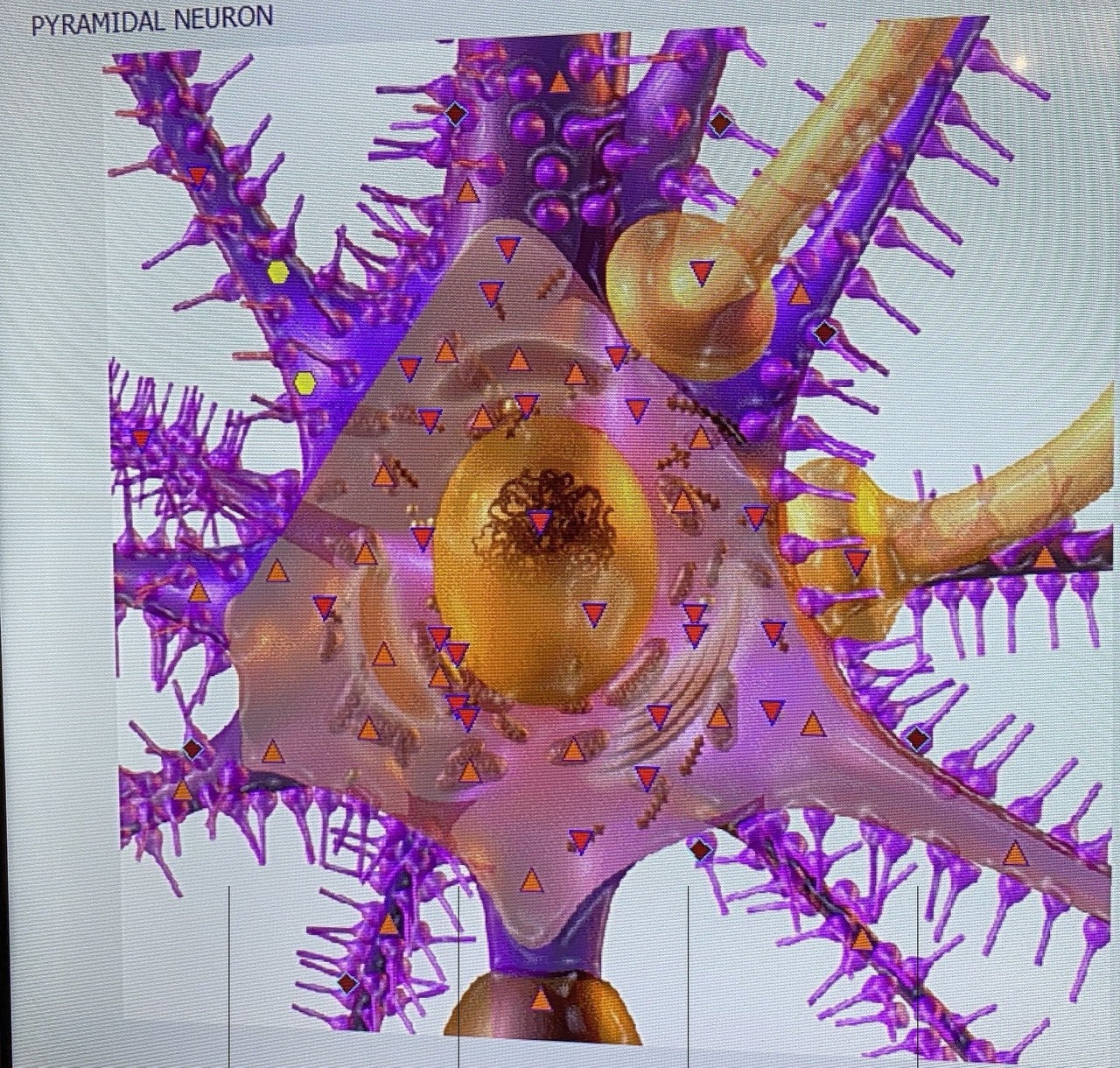 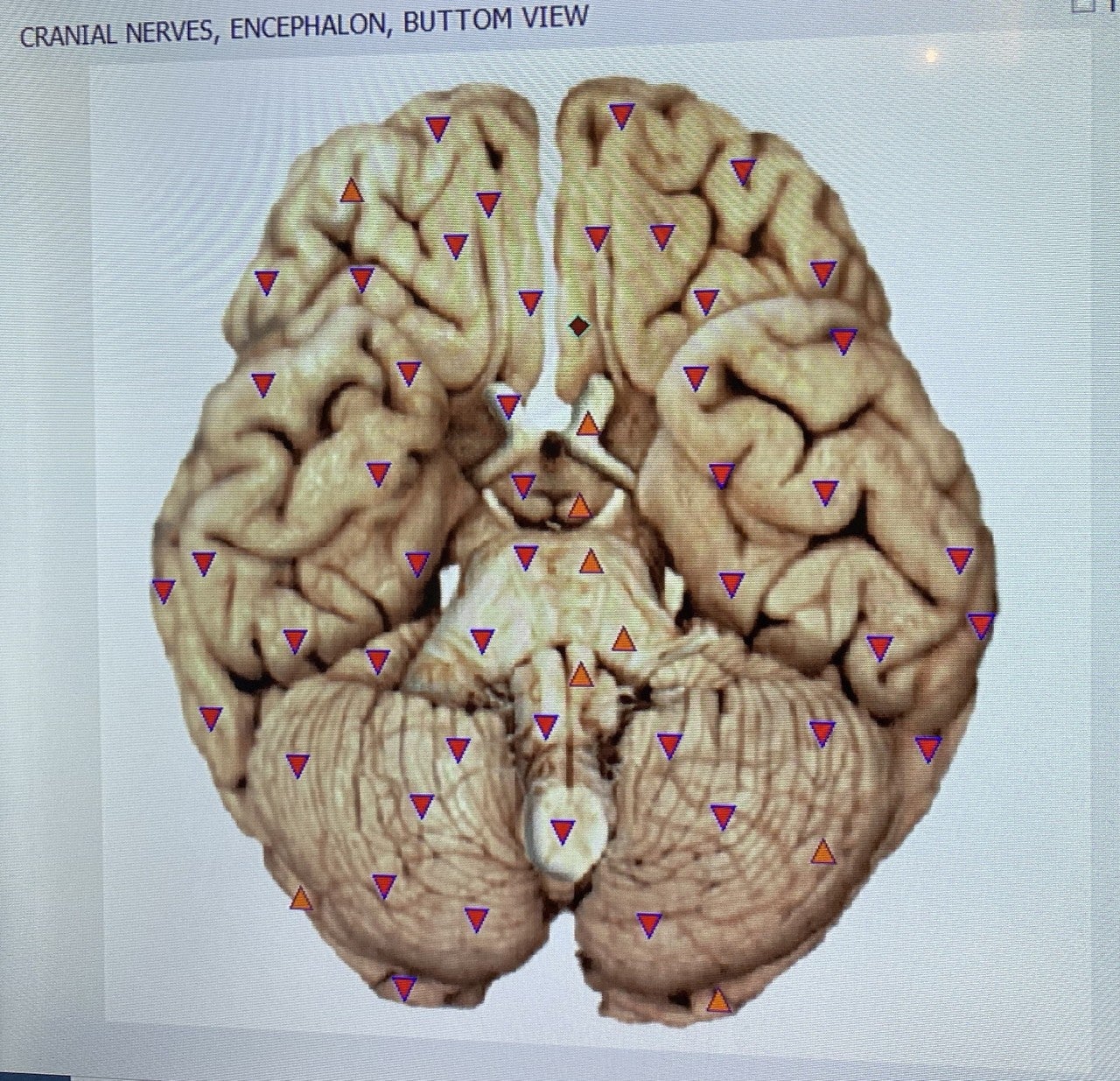 Nerves and blood vessels at the base of the arm (right)

Nerves and blood vessels at the base of the arm (left)

■ Deviation of OD value that I was interested in last time

This time, the deviation of the OD value (it is not good that there is a lot of green in the rightmost item) has improved from the previous time.

This number may also be associated with symptom improvement and may need to be continually monitored. 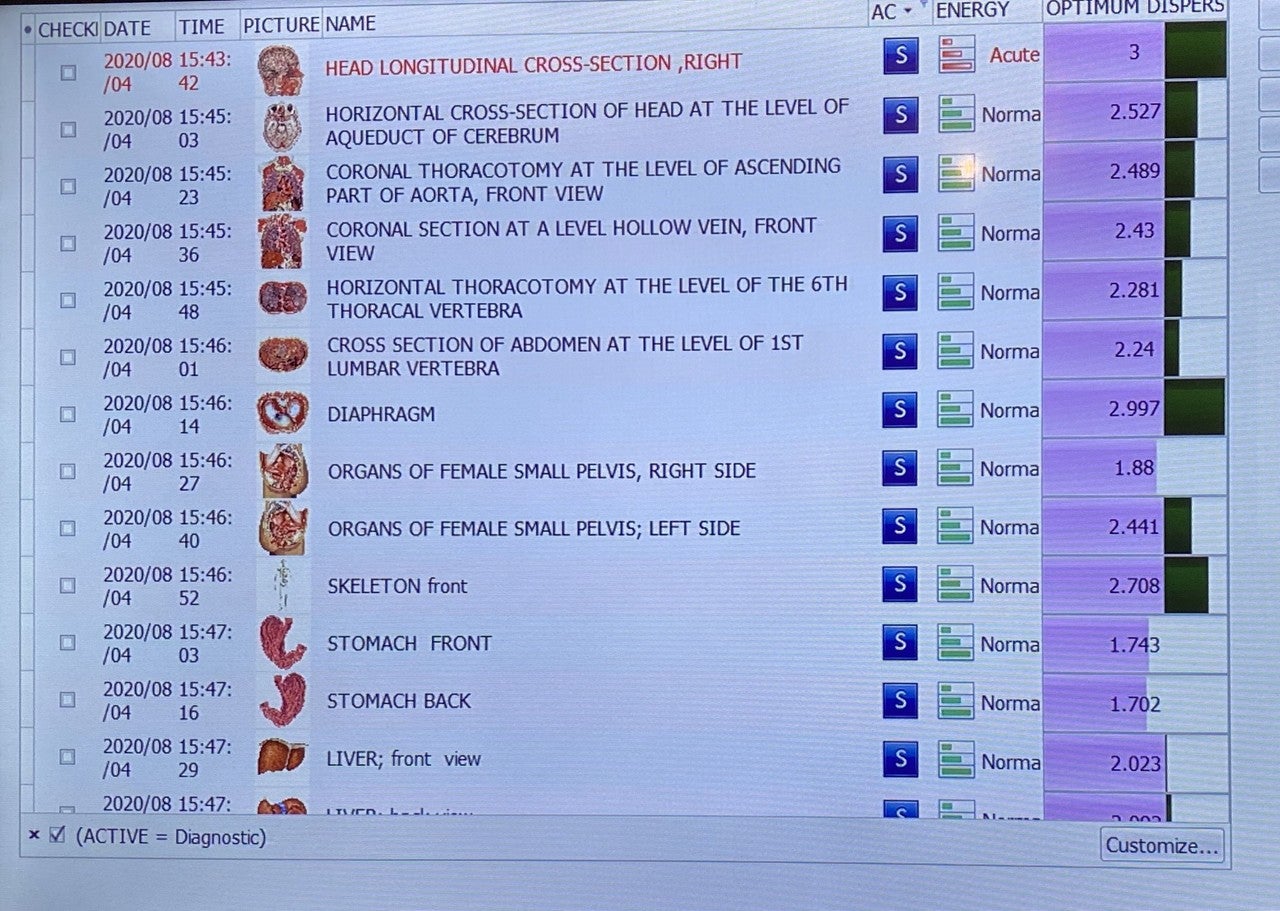 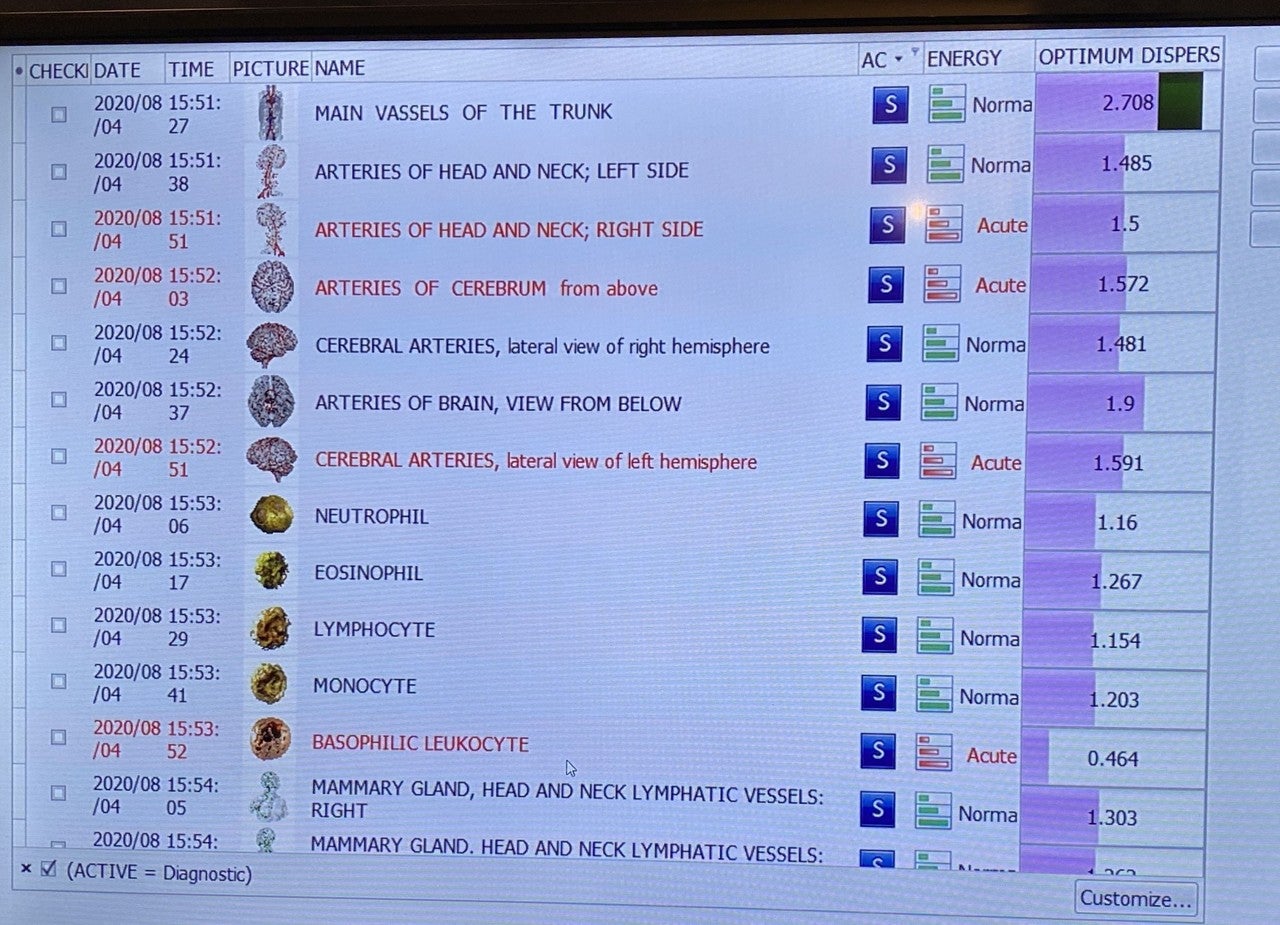 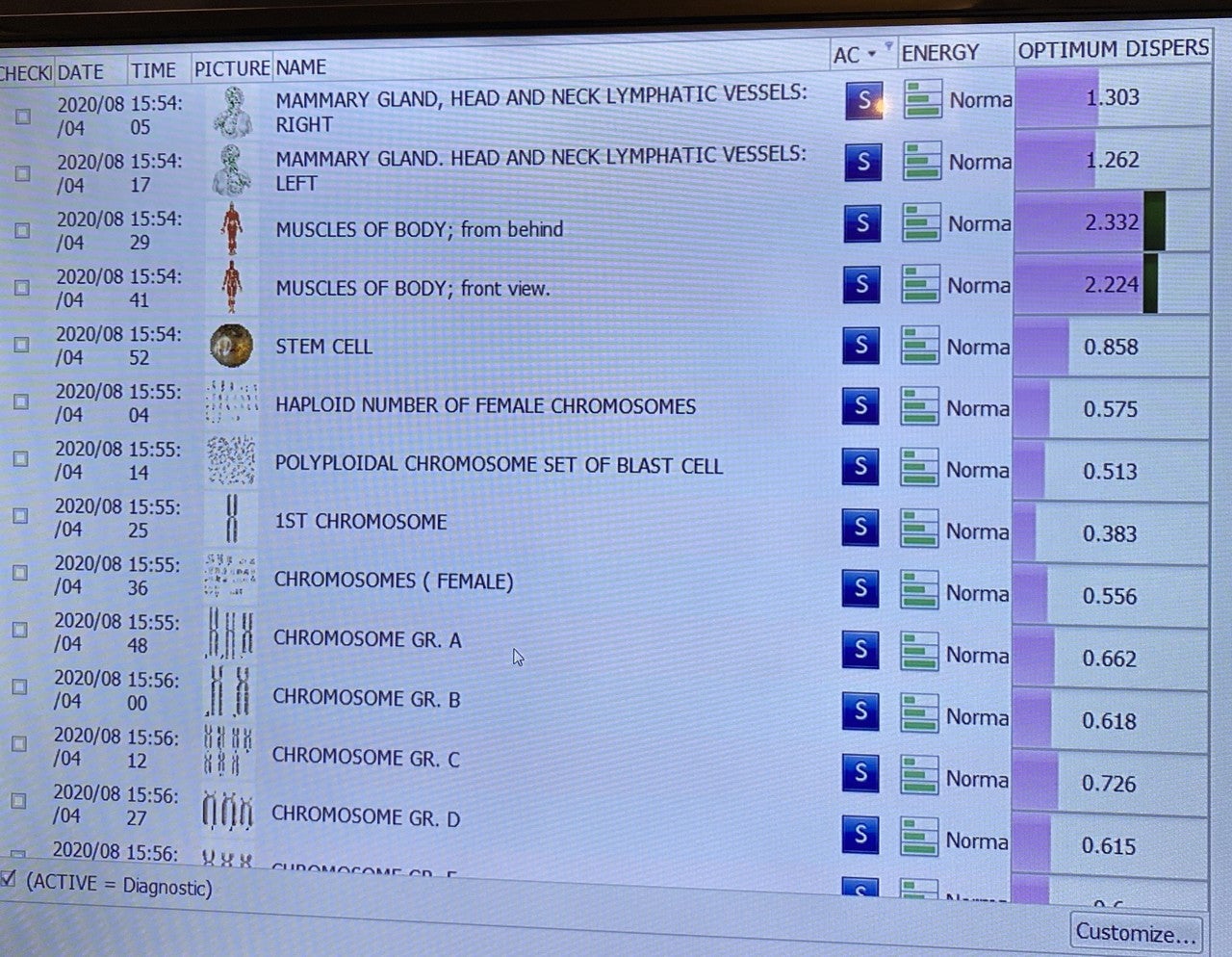 Regarding the intervention with the quantum wave motion, we will observe how these states change from the next time onward.

There is no effect measurement method for this item, so no results can be published.

As a result of bioelectric current therapy, there are two major problems.

It turns out that it may be possible to separate these two.

Reference: A memo of the content of the report from the client after the previous treatment

Among the above muscular conditions, neck stiffness seems to have a large daily life factor, so this time we will omit it in the effect measurement.

■ Consideration on problems of the central nervous system

There was a clear division between areas that could be improved and symptoms that were not improved after the previous operation, and there was a return although the return was within the expected range.

⇒There were some parts of the central nervous system that could not be approached at the points necessary for improvement, and there were some leftovers even where they were accessible.

Based on the above results from the previous time, this time

Since there should be a problem with the central nervous system in a wider range, the treatment was performed because it was necessary to access and remove the problem in a wide range and deeper in total.

Among them, the most responsive reactions were in the following order.

Responses were seen in that order (may also come from the cerebellum). 2.4. As for the basics, the treatment was mainly aimed at the bridge, and it is not clear to the touch whether it can reach the midbrain.

It may make sense to pay attention to the strength of this reaction from the next time onwards, so record it as a reminder.

Reference: Position of each part

We do not currently receive feedback on the results of this intervention, so we will make a decision after the third intervention.

As a result of the previous intervention, myalgia was once reduced from the state where the pain was so painful that I could not sleep last time, and some pain was revived, but it is in a state at all than when I came last time. From the place where it was said that it was good, it was temporarily placed numerically,

In the case of this symptom, it is estimated that it usually settles down to 0-2 with 4 treatment interventions and almost disappears after repeating a constant 0-1 several times (7 times in total as a guide).

Myotonia is a condition in which muscles cannot relax on their own initiative after exercising. For example, even if you grab the handle of a hot kettle and feel it is hot, you cannot let go of it.

Last time, I went to the right hand, which has the worst symptoms due to time constraints.

It seems that it was a symptom of temporary placement.

In this case, it was suggested that all the problem areas could not be approached. Last time, I couldn’t see all the muscles that would have a small effect only by performing the forearm mainly on the nervous system.

Before the second treatment, there was a certain effect on the right hand, so the left side was more pronounced as a symptom.

Due to the difference in the number of interventions, the reaction from the living body was stronger in the left hand, and the client also felt pain.

This time, I was able to grasp the range of influence of the state where muscles cannot relax, and made some improvements in that range.

At the beginning of the second intervention, it was expected that the influence of the central nervous system would be strong, and the area along the neural pathway and the function repair of the muscles of the forearm were mainly performed.

After that, the effect of the symptoms was measured and the effect on the function was only about half, so it became clear that it was necessary to remove the muscles of the palm, the muscles of each finger, and the tendon sheath.

In the second intervention, the electrical biological reaction that had to be removed for the muscles that move each finger was about half, and the effect was only about half as a symptom. (Due to time constraints)

Looking at the video, it seems that there is only a slight improvement, but the client’s experience has changed significantly more than the video.

In addition, due to the influence of the air conditioner working in the movie shooting environment, the symptoms were stronger and it seemed to be in this state.

Consideration from the result ・ Plan after the 3rd time

From the third time onward:
If it is assumed that the chromosomal problem has been improved, from the next time onward, it may be possible to act for a more fundamental solution by performing wave measurement and wave adjustment for individual DNA sequences, so measurement and improvement. It is necessary to identify the necessary items for

Continuous intervention is required assuming that it contributes to the repair of the nervous system by supplying blood flow necessary for nerve repair, removing active oxygen and removing cell stress. Ideally, you should be able to inhale daily, but if you use it once a week for about 2 months (8 times), you can expect to improve your health, so continue to use it. In order to support hydrogen gas inhalation, vitamin B12, especially methylcobalamin, which is usually classified as a drug in Japan and cannot be purchased at drug stores, will promote nerve repair. (Both hydrogen gas inhalation and vitamin B12 can improve skin condition)

Third and subsequent:
Scheduled similar interventions on an ongoing basis

The reaction time of the left medulla oblongata is also getting shorter.

As for the muscular system, the intervention did not completely return and improved each time.

Myotonia symptoms have improved by finely treating each finger in the future, as the muscle condition does not return to the point where it improved (it cannot keep up with the progress of the symptoms) and shows a steady recovery trend every time. I guess it will be done. If you mention only the part that could be treated, it is expected that the improvement will be faster than the nervous system from the condition of return, but since there are many parts that need to be dealt with, the total number of treatments required may exceed the nerve. .. Regarding chronic fatigue of the whole body, which has not been dealt with so far, it is expected that more clear functional improvement can be achieved by acting on the muscles of the trunk and lower body.

The progress is going well, so I think we can continue to make good reports. As of today, I am convinced that it is not difficult to control the progression of symptoms.

I believe more than anyone else that it will not be difficult to completely cure if you take the time to deal with it.

According to a comment from the client, it was 16.5 kg at the time of the examination two months before the intervention, but it improved to 23.3 kg after the procedure. 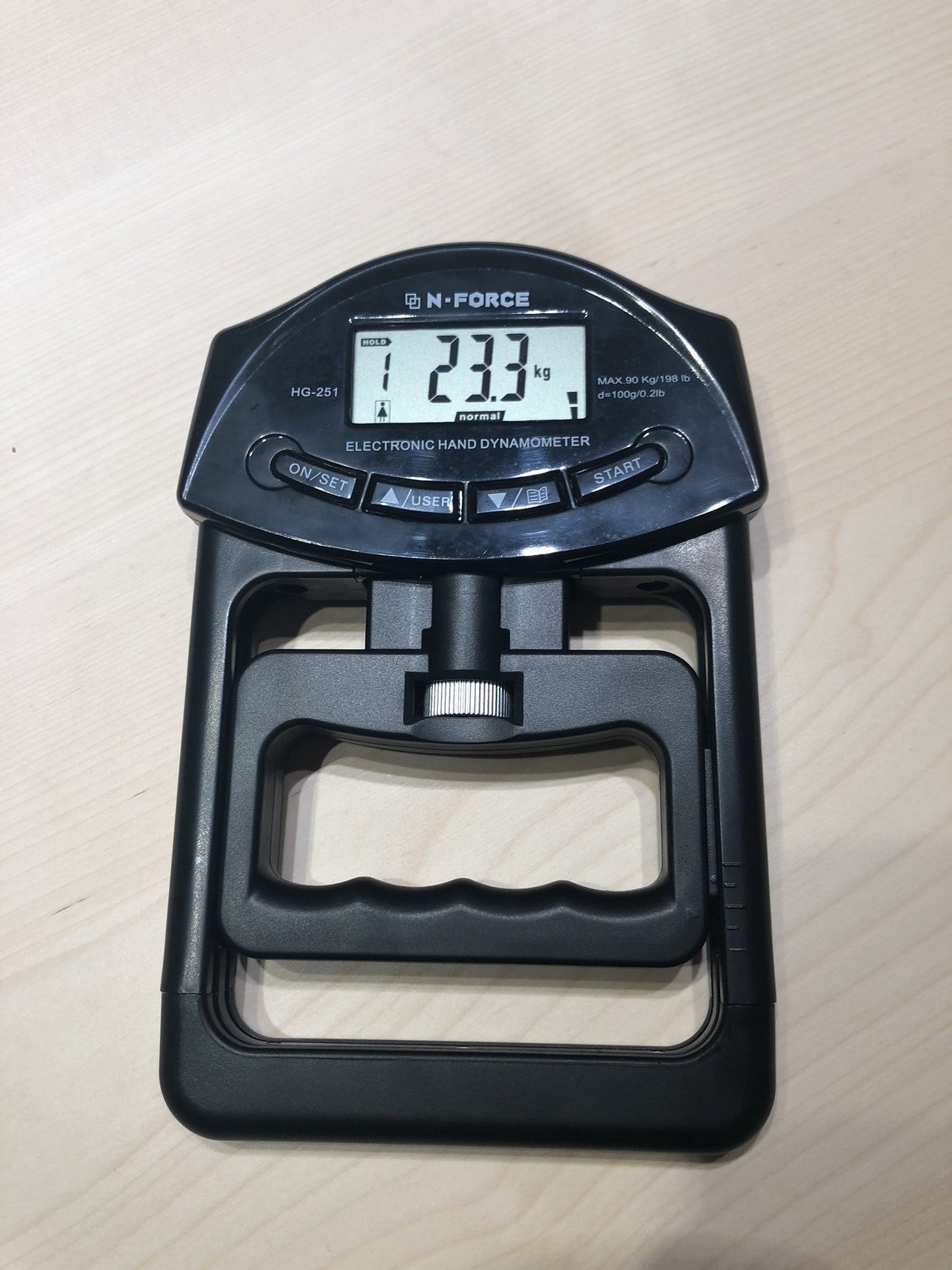 Easy to get tired

Probably the trunk and legs, which have a major effect other than the central nervous system, have not been intervened, but after 3 or 2 days after the procedure, it improved to about 6 (0 is zero symptoms, 10 is before the procedure) (maintaining a certain effect).

Since the return is the largest and there are insufficient improvements in swallowing, it is suggested that an approach may be necessary not only for the brain stem but also for the hypoglossal nerve and carotid artery that control swallowing function.

These spasms are caused by activity in several areas of the brain, such as the basal ganglia, thalamus, cerebellum, and cerebral cortex, although the response may be temporary because it is more specific than others, or factors outside the procedure. It may have been caused by an excess, and whether it was thyroid-related or not, it suggested the need for intensive brain-related and cervical intervention.